The 2009 Pulitzer Prize winners were announced on Monday, and both books are on topics relating to this blog! Hooray!

The winner for the 2009 Pulitzer in History went to Annette Gordon-Reed for her book, The Hemingses of Monticello: An American Family. Gordon-Reed is a professor of law at New York Law School. She earned a place in history with her first book, Thomas Jefferson and Sally Hemings: An American Controversy, which she then followed up with this book. Here is a brief review of The Hemingses of Monticello from WW Norton Publishing:

This epic work tells the story of the Hemingses, whose close blood ties to our third president had been systematically expunged from American history until very recently. Now, historian and legal scholar Annette Gordon-Reed traces the Hemings family from its origins in Virginia in the 1700s to the family's dispersal after Jefferson's death in 1826. It brings to life not only Sally Hemings and Thomas Jefferson but also their children and Hemings's siblings, who shared a father with Jefferson's wife, Martha. The Hemingses of Monticello sets the family's compelling saga against the backdrop of Revolutionary America, Paris on the eve of its own revolution, 1790s Philadelphia, and plantation life at Monticello. Much anticipated, this book promises to be the most important history of an American slave family ever written.

The winner for the 2009 Pulitzer for Biography went to Jon Meacham of Newsweek for his newest book, American Lion: Andrew Jackson in the White House. Most of our readers are probably familiar with Meacham. His book, American Gospel has been quoted on occasion here at this blog. Here is a brief intro to American Lion from Random House Publishing:

Andrew Jackson, his intimate circle of friends, and his tumultuous times are at the heart of this remarkable book about the man who rose from nothing to create the modern presidency. Beloved and hated, venerated and reviled, Andrew Jackson was an orphan who fought his way to the pinnacle of power, bending the nation to his will in the cause of democracy. Jackson’s election in 1828 ushered in a new and lasting era in which the people, not distant elites, were the guiding force in American politics. Democracy made its stand in the Jackson years, and he gave voice to the hopes and the fears of a restless, changing nation facing challenging times at home and threats abroad. To tell the saga of Jackson’s presidency, acclaimed author Jon Meacham goes inside the Jackson White House. Drawing on newly discovered family letters and papers, he details the human drama–the family, the women, and the inner circle of advisers–that shaped Jackson’s private world through years of storm and victory.

One of our most significant yet dimly recalled presidents, Jackson was a battle-hardened warrior, the founder of the Democratic Party, and the architect of the presidency as we know it. His story is one of violence, sex, courage, and tragedy. With his powerful persona, his evident bravery, and his mystical connection to the people, Jackson moved the White House from the periphery of government to the center of national action, articulating a vision of change that challenged entrenched interests to heed the popular will–or face his formidable wrath. The greatest of the presidents who have followed Jackson in the White House–from Lincoln to Theodore Roosevelt to FDR to Truman–have found inspiration in his example, and virtue in his vision.

Jackson was the most contradictory of men. The architect of the removal of Indians from their native lands, he was warmly sentimental and risked everything to give more power to ordinary citizens. He was, in short, a lot like his country: alternately kind and vicious, brilliant and blind; and a man who fought a lifelong war to keep the republic safe–no matter what it took.

Jon Meacham in American Lion has delivered the definitive human portrait of a pivotal president who forever changed the American presidency–and America itself. 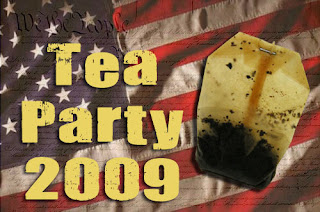 Comparing the Boston Tea Party to the various tea parties that took place across the nation last week is complex to say the least. After all, we're trying to compare 18th century America with today's society. Most of the social, cultural, and technological norms are completely different now. The majority of American colonists wouldn't even recognize modern America as being their "stomping ground."

With that said, here are a few specific differences between the tea parties of today and the original tea party of 1773:

1. First off, the legacy of the Boston Tea Party (1773) has been used on a number of occasions. In fact, Mahondas Gandhi (not Mahatma Gandhi) invoked the legacy of the Boston Tea Party in 1908 by inspiring his fellow Indians to burn British registration cards. In the early 1970s there were a large number of gatherings that called themselves "tea parties." At one “I Love America” rally led by the Reverend Jerry Falwell, followers were asked to burn bags of tea, symbolizing the people’s anger over the newly-enacted Supreme Court decision, Roe v. Wade. In 1973, the 200th anniversary of the Boston Tea Party, protestors gathered at the White House to call for the impeachment of then President Richard Nixon by throwing bags of tea on the White House lawn. In 1998, two conservative US Congressmen put the federal tax code into a chest marked "tea" and dumped it into the harbor. And finally, in 2006 a breakoff of the Libertarian Party called the “Boston Tea Party” was founded.

2. The motivations behind today’s tea parties and the original tea party of 1773 are completely different. The Boston Tea Party (1773) was actually a protest AGAINST a corporate tax cut, as opposed to today’s tea parties which protested rising taxes and an increase of government spending, etc. In 1773, The British East India Company was nearly bankrupt and instead of providing a "bailout" or government loan, Parliament passed the Tea Act, which eliminated for this company the duty on tea exported to America. As a result, smaller merchants in the colonies were expected to suffer, since they didn’t received the same tax cuts as the East India Company. The Boston Tea Party was the peak of a boycott against a company that got huge corporate tax cuts granted to them by the government. Once the ships from the East India Company arrived in Boston’s harbor, men like Samuel Adams and John Hancock were quick to seize the opportunity and turn it into a political advantage by rallying local Boston merchants to their cause. On December 16, after assembling at the Old South Church to express their grievances, Samuel Adams stood and gave the “secret message” to his devout “Sons of Liberty” (and Masons) to assemble at the docks, where they had their “tea party.” 342 chests of tea (property of the East India Company) were seized and dumped into Boston Harbor.

Now, this is often contrary to what many people know about the Boston Tea Party. After all, most Americans believe that the American Revolution was the result of taxes being levied against them by Britain. This isn’t 100% accurate. To understand the role that taxes played in the American Revolution we must go back to 1765. The British Empire, fresh of its complete rout of the French in the French and Indian War, was faced with a mounting debt as a result of that war. As a result, Parliament decided to levy a small tax (a fraction of one percent) against the colonists in America. Parliament believed that the colonists needed to play off a small portion of Britain’s debt, since the war had been fought to protect the colonists in the first place. As a result, the STAMP ACT was passed. However, the colonists exploded in anger and protested the act. Led by Boston Revolutionary Samuel Adams, the colonists succeeded in having the Stamp Act repealed. One of the main reasons for their success was their usage of the old propaganda phrase, “No taxation without representation,” which had been coined in 1750 by Reverend John Mayhew. By repealing the Stamp Act, the colonists believed they had succeeded and that everything would be ok.

The colonists’ excitement, however, was to be short-lived. In 1766 Parliament passed the often forgotten DECLARATORY ACT, which stated that Parliament had the right and power to govern its colonies, “in all cases whatsoever.” In essence, this became the catalyst for the revolution. It created a “showdown” between the legitimacy of Parliament’s rule and the sovereignty of the colonies. In fact, Thomas Jefferson would quote the Declaratory Act several times in the Declaration of Independence.

So, while taxes were an issue early on, it is important to realize that they played a very limited role in bringing about the American Revolution.

3. The Boston Tea Party was an illegal action of a mob that committed assault, theft, destruction of property, etc. The tea parties of today did no such thing (at least to my knowledge). The Boston Tea Party was literally an act of defiance to the laws of the British. The participants were willfully and knowingly being insubordinate to the will of King and country. The results of their actions caused the British to impose a complete blockade of Boston Harbor. Today’s tea parties, while an expression of anger/intolerance of current government decisions, did not invoke the same response nor did it take the same radical steps of defiance.

4. Today’s tea party participants claim that their petition was a “grass roots” movement led and organized by the people. The Boston Tea Party was not. It was led by prominent and influential Bostonians like Samuel Adams and the VEEEERY rich John Hancock, who, interestingly enough, stood to lose a fortune by the East India Company. His motives were not as pure as we are often taught.

5. The Boston Tea Party was NOT assembled out of a growing concern over the size of government, government spending, etc. Instead it was assembled on issues like colonial sovereignty v. Parliamentary rule, corporate tax breaks, and a lack of government funding for the development of the American merchant class. In fact, this last point (the development of the American merchant class) was a fundamental issue for Thomas Paine in his extremely influential pamphlet, “Common Sense.” It’s worth noting that political activist Glenn Beck has quoted Thomas Paine on several occasions, especially during the tea parties of last week. However, Beck neglects to recognize the fact that Paine was IN FAVOR of bigger government, more government spending, higher taxes, welfare programs, etc.

And while the differences between the tea parties of today and the Boston Tea Party of 1773 are vast, it’s important to remember that at the heart they share the same basic principle: that the people are where sovereignty and power ultimately reside…at least that is the hope of its participants, whether in the 18th or 21st century. And it’s likely that we haven’t seen the end to the legacy of the Boston Tea Party!!!
Posted by Brad Hart at 11:16:00 AM 43 comments: