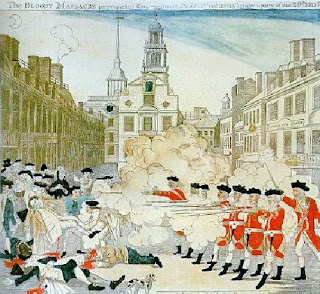 Of the many events prior to war with Britain, the Boston Massacre is one that receives a lot of attention. Yet this "massacre" only claimed the lives of five citizens (interestingly enough, a recently freed slave of Native American and African American decent, a man named Crispus Attucks, has been labeled as the first casualty of the American Revolution for being the first to die at the Boston "Massacre").

The painting above was done by one Paul Revere (I'm sure we all recognize that name) at the request of Samuel Adams. Revere's origional work was actually done as an engraving, not a painting.

The "Massacre" created such a stir in Boston that many citizens demanded that the soldiers responsible be shot at the same location of the citizens. What is interesting about the Boston Massacre is the fact that John Adams came to the defense of the soldiers. He stated that defending the soldiers in court was one of the noblest things he ever did in his life.

So my question is this: was the Boston "Massacre" a genuine slaughter or was it politically spun into one of the best pieces of revolutionary propaganda? As for me, I side with Propaganda!
Posted by Lindsey Shuman at 6:41:00 PM

Of course this was propaganda...five citizens killed...come on. Revere actually borrowed havily from another engraver for this infamous piece of propaganda. Also, in the engraving Crispus has benn whitened to enlist more sympathy for Bostonian citizens. I could go on and on. The Sons of Liberty led by Sam Adams were extremely adept at rousing the ire of the Boston populace towards their "oppressors".

Well said Mabry. I also agree that the "massacre" was one of the best propaganda tools used by the colonists to enlist support.

I agree that it was propaganda. All the evidence of what happened leads to it being propaganda. The Boston Massacre was over played in order to get more people on the colonial side.

The Boston Massacre was definitely propaganda. The victims were poor minorities and immigrants that most Boston citizens wouldn't even give the time of day to in any other situation