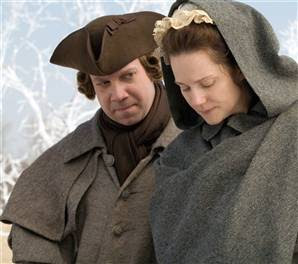 The early reviews are in for HBO's highly anticipated new miniseries, "John Adams." Overall, historians, skeptics, and American movie buffs alike have given the series a resounding two thumbs up. Laura Linney has received the most praise for her portrayal of Abigail Adams. David Morse has also received very high marks for his role as George Washington. Tom Wilkinson, who plays Benjamin Franklin, has received the most criticism. Most of the negative critique centers on the fact that historians blame this film for portraying Franklin as a sober and angry man. The truth, however, is that Franklin was more coy and happy-go-lucky in his later life. The treatment of Franklin in this light has been attributed to McCullough's portrayal of Franklin in his book. After all, Franklin and Adams thought very little of each other.

Though the majority of the official reviews are still to come, the few individuals that have seen the film have a great deal to say. T.V. Guide Editor Matt Roush had this to say about HBO's portrayal of John & Abigail:

"Befitting such an enduring love story, Paul Giamatti and Laura Linney are splendid as America's second First Couple. At home, when John sheds his wig and attitude, they're equals: "You do not need to quote great men to show you are one," Abigail chides him, all the while acknowledging her husband's indisputable greatness." 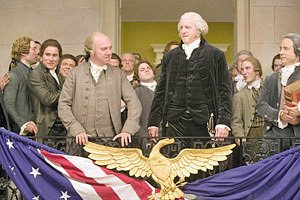 The Boston 1775 Blog also lists some excellent critiques from Jill Lepore of The New Yorker and Ira Stoll of the New York Sun (To read Lepore's critique click here. For Stoll's review click here).
Ladies and Gentlemen, get your popcorn ready and prepare to strap in! This weekend we begin the journey!
Posted by Brad Hart at 2:52:00 PM

Paul Giamatti is a genious, and him potraying Adams makes sense. Adams wasn't the most "savy" guy, but hey he was a founding president. Lets see if Giamatti can go beyond my expectations, and my expectations are alreading pretty high.

I agree. I think HBO did a pretty good job with the casting for this project. I'm sure that there will be a few mistakes here and there (mistakes that historians are sure to take note of), but I think that the overall opinion of this miniseries will be pretty positive.

The biggest problem I have so far wit the series - based on the early reviews - is the filmmakers' decision to associate John Hancock and Sam Adams with the tarring and feathering scene that is to be graphically portrayed in tonight's episode.

I'm all for them showing someone getting tarred and feathered. I think it's important for Americans to see that the mob stuff happening in New England (and other parts of the colonies) wasn't all good. IN fact, the mobs could be very brutal, which is why many Founders (incl Adams) shied away from "mob rule."

But the filmmakers could've made that point, without dragging down Hancock and Sam Adams.

HBO's John Adams is a thrilling realization of, what I'd say, is the fact that history is more extraordinary and more interesting than fiction. Film makers, even those keenly interested in historical accuracy, face a challenge to condense events without missing key aspects of the story and to get the personality and bearing of historical characters right. The handful of movies made about the life of Beethoven suggests how difficult this can be. Each depicts Beethoven's anti-social behavior and deafness from mild to severe, from quirky to seemingly mad, from hard of hearing to utterly deaf. The periods in his life portrayed don't seem to be the key difference, it seems to be the conception of the filmmakers that changes.

"John Adams" is more careful and thoughtful on these questions but the John Adams of the film differs from the John Adams of McCullough's biography and other other biographies. It seems to me that the irascible, unlikable, inappropriate and bitter parts of Adams personality have been emphasized for dramatic contrast with his extraordinary accomplishments. And John Adams, the difficult patriot and father of his country who on occasion undermined his own efforts and his reputation is the core of the plot. It seems to be a way to make a film that film makers can't resist.

"John Adams" does an admirable job of condensing events and devising conversations among the characters that never happened but do an incredibly good job of portraying events accurately. One of my favorite scene is when Citizen Genet makes an impertinent display in the office of the President with Jefferson Hamilton advising Washington. This meeting never occurred but each character's viewpoint and remarks relative to the issue are accurately portrayed. One short scene tell teh whole story.