Native Americans and the Lost Tribes of Israel 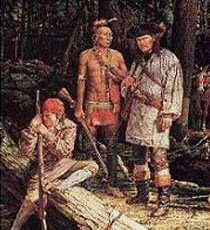 The indigenous tribes of the "New World" have been a source of fascination not only for modern scholars, but for early American colonists as well. For hundreds of years, historians, anthropologists, archaeologists, and clergymen have argued over the origins of the diverse Native American tribes that once encompassed the entire face of North and South America. Even in our modern society, scholars of all types continue to argue over the origins of the indigenous tribes of the Americas, despite advances in genetics, cultural anthropology and history.

Perhaps the most provocative of all the theories regarding the origins of Native American tribes is the belief that they could be somehow linked to the 10 lost tribes of Israel. Even the earliest settlers and explorers of the New World were intrigued by the possibility of encountering a lost remnant of the House of Israel in the New World. Christopher Columbus, the man credited with "discovering" the New World, proclaimed that these newly discovered "Indians" were, in fact, of Jewish origins. Columbus even suggested that Spain could, "recruit their bodies and their wealth to assist Europeans in a final crusade to crush Islam and reclaim Jerusalem" (Alan Taylor, American Colonies: The Settlement of North America, 33).

After the American Revolution, the fascination with Native American origins was carried to new heights. Despite the fact that no obvious proof could be found to substantiate the claim that Native Americans were the lost tribes of Israel, scores of religious zealots hoped to uncover this claim's validity. Just before embarking on their continental trek, President Thomas Jefferson wrote a brief letter to Meriwether Lewis and William Clark in which he instructed them to "acuire what knolege you can of the state of morality, religion & information among them [the Indians] as it may better enable those who endeavor to civilize & instruct them." In addition, Jefferson shared a personal correspondence with his friend, Meriwether Lewis, in which he expressed his hope that the trek west might provide evidence as to the whereabouts of the lost tribes of Israel (Stephen Ambrose, Undaunted Courage, 154).

In addition to the president, Dr. Benjamin Rush revealed his hope for the discovery of the lost tribes of Israel when he wrote the following inquiries to Lewis and Clark:

At what time do they rise? What about baths? Murder? Suicide? Are any animal sacrifices in their religion? What affinity between their religious Ceremonies & those of the Jews? [my emphasis].

Though the Lewis and Clark expedition never returned with any evidence to support the Native American/lost tribes of Israel claim, the legend remained extremely popular throughout the early part of the 19th century. Ethan Smith, for example, who was not only a pastor to a small church in Vermont but was also a self-proclaimed expert on Jewish history, hoped to prove the Jewish roots of Native Americans by appealing to the Bible. In his 1825 book, View of the Hebrews, Smith endeavors to point out what he saw as similarities between Native American religious custom and that of ancient Judaism. As Smith states:

In all their rites which I have learned of them, there is certainly a most striking similitude to the Mosaic rituals. Their feasts of first fruits; feasts of in gathering; day of atonement; peace offerings; sacrifices. They build an altar of stone before a tent covered with blankets; within the tent they burn tobacco for incense, with fire taken from the altar of burnt offering. All who have seen a dead human body are considered unclean eight days; which time they are excluded from the congregation.

For Smith, this was ample proof of God's biblical prophesy that, "he [God] shall set up an ensign for the nations, and shall assemble the outcasts of Israel, and gather together the dispersed of Judah from the four corners of the earth" was being fulfilled (Isaiah 11:12).

In the record of Imanual Howitt, who had traveled extensively throughout the United States in the early part of the 19th century, the Native Americans held a certain intrigue that permeates his writings. Howitt, though not a deeply religious man, had adopted the earlier opinion of William Penn, who believed that the "Indians...developed from the lost tribes of Israel." As a result, Howitt became a passionate advocate for the further study of Indian rituals and customs.

The fervor over the possibility of American Indians being of Jewish descent was only furthered when Barbara Simon published her book, The Ten Tribes of Israel Historically Identified with the Aborigines of the Western Hemisphere in 1836. Aside from quoting a plethora of biblical sources to defend her thesis, Simon also claims that early Mexican paintings found by Spanish conquistadors contain "allusions to the restoration of the dispersed tribes of Israel."

In addition to Simon's work, other books emerged during the early part of the 19th century in support of the Native American/lost tribes of Israel theory. Books like A View of the American Indians by Israel Worsley in 1828, American Antiquities and Discoveries in the West by Josiah Priest in 1835, and the before mentioned View of the Hebrews by Ethan Smith in 1825. All of these works combined to create a spirit of enthusiasm that deeply favored the Native American/lost tribes of Israel connection.

Perhaps the most popular -- and most controversial -- interpretation on the origins of Native Americans comes from Mormon founder and prophet Joseph Smith. During his youth, Smith claimed to have received a revelation from a heavenly messenger, who related to Smith the location of a hidden record of an ancient people:

He said there was a book deposited, written upon gold plates, giving an account of the former inhabitants of this continent, and the source from whence they sprang. He also said that the fullness of the everlasting Gospel was contained in it, as delivered by the Savior to the ancient inhabitants.

This record, which eventually became known to the world as The Book of Mormon was allegedly a scriptural account of God's dealings with a remnant of Jewish descendants who had migrated to America during ancient times. As the Book of Mormon's introduction puts it:

The Book of Mormon is a volume of holy scripture comparable to the Bible. It is a record of God’s dealings with the ancient inhabitants of the Americas and contains, as does the Bible, the fullness of the everlasting gospel.

The book was written by many ancient prophets by the spirit of prophecy and revelation. Their words, written on gold plates, were quoted and abridged by a prophet-historian named Mormon. The record gives an account of two great civilizations. One came from Jerusalem in 600 B.C., and afterward separated into two nations, known as the Nephites and the Lamanites. The other came much earlier when the Lord confounded the tongues at the Tower of Babel. This group is known as the Jaredites. After thousands of years, all were destroyed except the Lamanites, and they are the principal ancestors of the American Indians.

Regardless of their origins, the role of religion in shaping the perception of early American society was extraordinary. The aura of mystery that shrouded the origins of the various Native American tribes kept early Americans in suspense for centuries. For a people who were primarily defined by Christian doctrine, the "Indians" of the New World became a living exhibit of their biblical doctrine. By clothing these native tribes in the robes of the lost tribes of Israel, Christian zealots found an additional motive for their further conversion to their brand of Christianity.
Posted by Brad Hart at 8:07:00 PM

as i understand it, the 10 tribes,(israelites) living in the north, fell out of favor with God and subsequently were captured and taken into captivity by the assyrians, held in captivity for hundreds of years, becoming assimilated, and traveled into euphrates by the narrow mountain passages, north to the caucasus mountains and on to the northern shore of the black sea. this is exactly where history places the cimmerians, who later traveled up the danube and rhine river basin into northwestern europe and finally into the american continent.

In The Book of Mormon, the first record keeper, Nephi, explains that they are decendants of Joseph, the son of Jacob. So, yes they are from Jerusalem (Isrealites), but more specifically the tribe of Menasseh. Source: lds.org

*BEWARE the BEAST MAN*, for he is the Devil's pawn. Alone among "AHAYAH'S" (I AM) creations, he kills for sport, lust and greed. Yea, he will murder his brother 'Yahcob' to possess his brother's land. Let him [not] breed in great numbers, for he will make a desert of his home and yours. Shun him; drive him back into his mountain
lair. STUDY HIM as he has studied you. Although you intend him no harm, without
thought, provocation or hesitation he will MURDER you, your family and your
offspring as swift as a cunning bird of prey. He knows his time is short. And just as his father Esau, he too hates you with an ever-lasting perfect hatred; for he knows who the *Captured Slaves* truely are, oh' *House of Ysrayl*.Trust in your
father - the ANCIENT OF DAYS ! Be still, - Vigilant and learn to become a
'Vagabond', ready to leave the den of this wicked Predator as swift as Lions. Don't
Fire, Unless Fired Upon! Stay alert ~ WARN YOUR CHILDREN~; for he is the harbinger of DEATH. He is the Eagle of Obadiah, Esau of Malachi, of Rome, Idumiea, Khazaria, Amaleck, Ashkanaz and of the *CAUCUS MOUNTAINS*. -With his STAR of MOLOCH & FLAG of EAGLE; he kills for sport and rains death from the heavens. He goes by many names. He is a murderer as was his father Cain; a Lier, Trickster and Dangerous.

Pretty cool. Most Mormon Scholars consider the PreClassic Mayans were part of the Book of Mormon people. And if you look at Spanish priest documents, some at least thought so too. Great point that many have thought this before.


Pakistani Slim and sexy Girlfriend Fucking By Boyfriend In Her Bedroom

this individual is a child of satan sent to distract TMH' children who are seeking after wisdom and knowledge, let's ignore satan spawn and stay focused DEAR friend
B€ BL€SS€D IND€€D!!!!!

Great choice! They are a great investment in one's personal well-being. HotSexyDolls.com sex dolls can provide companionship and sexual satisfaction at any hour of the day

What are the Benefits of Computer Glasses?
People wear glasses for many reasons. Many people have the problem of distinguishing faraway things or objects. Besides, many people have the problem of defining nearsighted objects. So, whenever we fail to see a faraway passerby or a car, we go to the doctor. Then the doctor prescribed us a power glass. It probably solves our problem of distinguishing objects clearly.
lentes para computadora