On New Year's Eve of 1775, the American forces under Benedict Arnold and Richard Montgomery were defeated in their late night attack on Quebec. Having arrived at the city almost a month prior, both Arnold and Montgomery were hopeful that they could force the British from their strongholds by surrounding the city and bombarding it with canon fire. Much to their dismay, the British were well supplied and entrenched, and the Canadian population was not eager to support the American cause of liberty as Arnold, Montgomery and even Washington had hoped. As a result, the "rebels" were forced to attack the city on December 31 with everything they had. With year enlistments coming up, along with a horrific shortage of food and supplies, both Arnold and Montgomery knew that they would not be able to hold out for long. Simply put, the attack became an all-or-nothing roll of the dice. 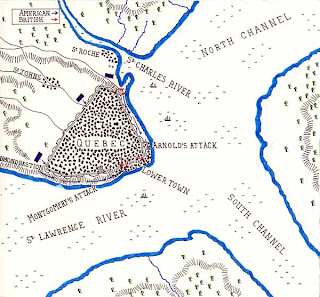 The outcome was disastrous for the Americans. Of the 900 American soldiers who participated in the assault, 100 were killed and another 400 were taken prisoner -- the British only lost 6 in the assault. Among the casualties was none other than General Montgomery, who was killed in the attack. Colonel Benedict Arnold was also severely wounded in the leg, which forced him to relinquish command -- albeit temporarily -- to Daniel Morgan, who had the presence of mind to call off a second assault on the city.

I'm enjoying Washington, A Life and just read the attack on Quebec chapter. My comments relate to to possible errors that might assist Ron Chernow in the next edition: (1) he mentions Henry IV when I think the scene is from Henry V (2) he indicates that Republicans opposed the draft, but, of course, there was no Republican party for another thirty some odd years.

Oy vei. This is why the Romans didn't attack a defended city with force.

Is there a particular reason why they did not withdraw? The British were on the defensive. I'm assuming they sent ahead scouts, who would have reported the situation.

Had the British they proceeded to attack THEM they at least could have at least chosen the location, and certainly more than 6 Brits would have died.

I any case, I am enjoying your blog! I am glad I found it

I am impressed by the quality of information on this website.

I must agree as well with this article. Google is evolving and changing their search engine platform to better serve users for better search quality. Google places a huge premium for quality content.

Very helpful suggestions that help in the optimizing topic,Thanks for your sharing.