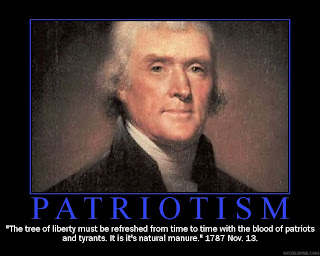 This past week Americans witnessed the beautiful miracle that is a democratic election. And though many on the left are probably unhappy with the results, all Americans should be proud of the fact that in this nation we can have a safe transfer of power from one person to another without a single shot being fired or a single life being lost. In my opinion, this is one of the greatest blessing of living in America.

Over the past few months, however, we have witnessed a great disturbance in the collective political discourse of this nation. The fires of political partisanship has led to an inferno of overheated, hate-filled demonstrations of pretended patriotism aimed at "securing" America's "true" glory no matter the cost (some have even suggested revolution as a viable option). Now, it's not my intention to engage in a political debate here (that's one of the things I love best about this blog...very little politics), but I do think there are some historical matters to clear up here.

In the wake of this public discourse one infamous and stirring quote has made its way back onto the public stage: enter none other than Thomas Jefferson.

In 1787, Thomas Jefferson -- who was then living in France -- wrote a letter to his friend William Smith. In the letter Jefferson wrote the following words, which have, from time-to-time, been quoted to affirm the rights of the people to rebel against one's government:

The tree of liberty must be refreshed from time to time with the blood of patriots & tyrants. It is it's natural manure.

Simple enough, right? Well, not quite. And while Jefferson's "tree of liberty" quote has become a favorite of many who oppose the current direction being taken by the Obama Administration, the quote has an important and often forgotten context.

As mentioned before, Jefferson was still living and working in France in 1787. At the time, Jefferson was deeply concerned about some of the proposals for the new United States Constitution -- particularly the role of the executive branch, which he saw as being far too powerful. In addition, Jefferson believed that the recent rebellion in Massachusetts -- which became known as Shays' Rebellion -- had heightened the fears of the American elite, causing them to throw their weight behind a stronger executive government. Shays' Rebellion was essentially an armed rebellion against taxes being levied at Massachusetts farmers. It's leader, Daniel Shays -- who had served as a soldier during the American Revolution -- used the legacy of the American Revolution to garner support for his cause. As a result, scores of patriotic Massachusetts men, most of whom were farmers themselves, resurrected the legacy of the "liberty tree" to fight the perceived injustices of the newly created government. As a result, America's governing class -- and yes, it was a class -- believed that a strong centralized government was the only surefire way to ensure America's future security.

For Jefferson, this was a textbook example of how partisan passions could cloud judgement, creating an atmosphere of panic and fear. As Jefferson states in his letter to William Smith:

Yet where does this anarchy exist? Where did it ever exist, except in the single instance of Massachusetts? And can history produce an instance of rebellion so honourably conducted? I say nothing of it's motives. They were founded in ignorance, not wickedness. God forbid we should ever be 20 years without such a rebellion. The people cannot be all, & always, well informed. The part which is wrong will be discontented in proportion to the importance of the facts they misconceive. If they remain quiet under such misconceptions it is a lethargy, the forerunner of death to the public liberty. We have had 13. states independent 11. years. There has been one rebellion. That comes to one rebellion in a century & a half for each state. What country before ever existed a century & half without a rebellion? & what country can preserve it's liberties if their rulers are not warned from time to time that their people preserve the spirit of resistance? Let them take arms

Simply put, Jefferson understood Shays' Rebellion to be a common and important component of republican government. Without it, the people could not be effectively represented and the communal "lethargy" would eventually destroy the nation. On the flip side, however, Jefferson also notes that the people are rarely if ever well informed on all issues. It is this communal ignorance -- Jefferson emphasises ignorance and not wickedness -- that Jefferson believed the government must endeavor to remedy. He continues:

The remedy is to set them right as to facts, pardon & pacify them.

The remedy is not suppression or rejection of public discontent, but rather persuasion and public discourse.

So would Jefferson support the current public dialogue? There's a good chance that he would. We can debate whether or not he would like the current rhetoric of the conservatives/liberals but I think it's hard to deny that Jefferson would be pleased to see the outpouring of public interest. 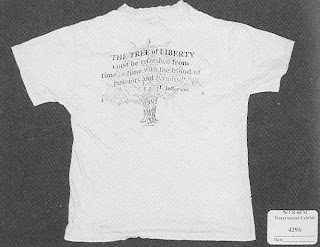 With that said, I doubt Jefferson would support actual blood being shed on the proverbial "Tree of Liberty." After all, enough blood has been lost thanks in part to this often misunderstood quote. It was Timothy McVeigh, the convicted Oklahoma City bomber, who was so very misguided by his poor understanding of Jefferson's words. On the day he chose to murder 168 of his fellow Americans, McVeigh was wearing a shirt that carried Jefferson's infamous words:

The tree of liberty must be refreshed from time to time with the blood of patriots & tyrants. It is it's natural manure.

May we ALWAYS remember to be cautious with the history we fail to understand!
Posted by Brad Hart at 2:02:00 PM

Brad,
Thanks for the post.
Though the "tea partiers" are thought to be revolutionary, I don't believe all of them have this mentality. Some just value government being attuned to the people's wishes when it comes to such economic decisions, such as healthcare. Bigger government does NOT ensure protection of individual liberties. Bigger government only ensures a paperwork for the average guy and a "cover up" for the governing class. (so the little guy is held accountable while those governing are not...this seems to me to be the political atmosphere of the tea partiers...)

History has also proven what happens whenever Marxist ideology is embraced, in regards to "class warfare", and social engineering.

The middle class looses and inevitably is diminished, while government and the lower classes grow.

Yes, a "nice" post but cowardly stated. If you really feel our state of government today, doesn't deserve a complete "refresh", then I think you have missed Jefferson's point altogether. I don't see any other solution? We keep doing the same over and over now for the last 50+ years and NOTHING has changed. I'm sorry, but our politicians have completely lost sight of their jobs and responsibilities to the people and the nation. The corruption, partisanship, and lack of integrity are destroying everything we have built.
You are very naive.

If you want your ex-girlfriend or ex-boyfriend to come crawling back to you on their knees (no matter why you broke up) you must watch this video
right away...

(VIDEO) Have your ex CRAWLING back to you...?

Have you ever used the help of WritePaper.Info? They can help you with any type of writing - from personal statement to research paper. Due to this service you’ll save your time and get an essay without plagiarism.

Investing online has been a main source of income, that's why knowledge plays a very important role in humanity, you don't need to over work yourself for money.All you need is the right information, and you could build your own wealth from the comfort of your home!Binary trading is dependent on timely signals, assets or controlled strategies which when mastered increases chance of winning up to 90%-100% with trading. It’s possible to earn $10,000 to $20,000 trading weekly-monthly, just file a complaint with Mr. William, I had almost given up on everything about binary trading and ever getting my lost funds back, till i met with him, with his help now i have my lost funds back to my bank account and I can now trade successfully with his profitable strategies and software!! Email: GLOBALFXINVESTMENT3@GMAIL.COM