Washington Saves the Pope...Sort Of 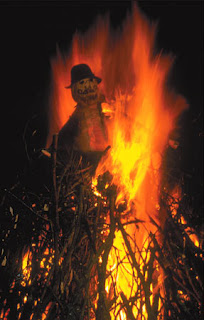 That is, unless you were a member of George Washington's army. In his November 5, 1775 General Orders to the Continental Army, Washington strictly forbade the practice of burning the Pope in effigy or the mockery of Catholicism in general:

As the Commander in Chief has been apprized of a design form'd for the observance of that ridiculous and childish custom of burning the Effigy of the pope -- He cannot help expressing his surprise that there should be Officers and Soldiers in this army so void of common sense, as not to see the impropriety of such a step at this Juncture; at a Time when we are solliciting, and have really obtain'd, the friendship and alliance of the people of Canada, whom we ought to consider as Brethren embarked in the same Cause. The defence of the general Liberty of America: At such a juncture, and in such Circumstances, to be insulting their Religion, is so monstrous, as not to be suffered or excused; indeed instead of offering the most remote insult, it is our duty to address public thanks to these our Brethren, as to them we are so much indebted for every late happy Success over the common Enemy in Canada.

brad,
i recognize that america have alliances with muslims as to defense of our country. but, how do we tolerate or understand where to draw our distinctions where it concerns our risks to security? we have bent over backwards to the extent to discriminating against
free speech because we fear offense. (and i am talking about giving preferential treatment and dismissal of their offenses toward us or others...)

i belive in liberty and that cannot be maintained without liberty of information, freedom of the press and freedom of speech. religious tolerance where it limits these aspects to liberality is going down the road to tyranny under "religious law"...

I agree to an extend. Freedom of expression is extremely important. However, Washington was a military general and the rules for the military have always been different. Knowing that we would need French support for our war, and being that the French were primarily Catholic, this seemed like the prudent move for the General.

Yes, but fortunately, America is not a military STATE. In Washington's context of a military officier, I would agree. He deferred his right of individual expression for the sake of military discipline.

Sir which is best book to refer for, Right now because of growing human activities many Rivers are affected, American Revolution

Its like you read my mind! You appear to know a lot about this, like you wrote the book in it or something. I think that you could do with some pics to drive the message home a bit, but other than that, this is great blog. An excellent read. I'll certainly be back.national archives civil war records