Was Lincoln the Most Influential American in History? 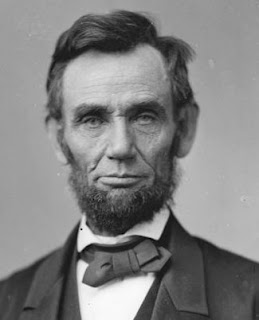 I'd like to see The Atlantic update this list by moving George Washington to the top spot where he belongs (without Washington, there wouldn't be a United States or a President Lincoln) and to move Jefferson down a few notches. He continues to be overrated in his influence. And Paine at #19? What's that about?

If you want to check out the list, visit The Atlantic's "100 Most Influential Figures in American History." And then let Brad and me know what you think in the comments section.
Posted by Brian Tubbs at 3:54:00 PM

I couldn't agree more. How Washington doesn't easily come out on top of polls like this is something I can't understand. Likewise, John Adams should be ranked considerably higher than Paine.

Some believe that Abraham Lincoln was the greatest president because he secured civil rights for the African American. But, others think that civil rights was a power grab for centralizing government and granting government more rights over States. States needed to have the right to ensure laborers for their economic 'advantage'.

The problem today, is that all people scream for civil liberties that define thier "group", instead of civil liberties being a right of an American citizen. Groups divide over difference and it can become disunifying to the country.

In this sense, Federalism is a better way of understanding diversity in unity.

This is what we presently face with immigraion policy and Arizona's right. Islam also challenges us with religious rights of conscience. But, wherein lies the right of the American citizen?

Gloablists use the 'natural rights argument to defend human rights, which can subvert the nation-state.

I'm not sure where I play out on all of this, as I am still learning and thinking through what has been discussed and written on the subject. It seems that whenever one gets to the "larger concept" the more apt there is to be abuses of power, and a lack of definition or conflicts for legal issues.

Globalists don't adhere to indviidual choice as a value, because they are only seeing collective States.

It is my understanding that Federalsim was the right of the State to decide what was best for its contiuencies. There was no "one size fits all".

How can laws be unifying when such laws are 'local"? Isn't this the problem we presently have with the discussion on international law, human rights, and antion-states?

And how does the nation state such as ours that believes in individual liberties protect such liberties in light of commercial interests, and other states that might not value individual rights?

The article was quite interesting. Keep it going...
I would like to draw your attention towards an article on “Inventions that revolutionised the world”. Every schoolchild knows that the scientific genius and inventor, Thomas Alva Edison invented the light bulb in 1879. Though the credit to make electric bulbs commercially viable goes to him, many believe that he did not invent the bulb and bought patents from those who did.
To read more interesting facts check http://www.sinapseblog.com/2010/11/inventions-that-revolutionised-world.html

Nobody cares about your bogus crap, Arctic Patriot. Don't come back here.

Centralization of power is always the enemy of liberty! Liberty resists tyrannical attempts at universalizing what can only be understood by individuals in their personal and private convictions and commitments.

Recharz is one of the best media sites in the world. It generates 30 million page views per month, as per Google Analytics report.Recharz

I’d must examine with you here. Which isn't one thing I usually do! I enjoy studying a publish that can make individuals think. Also, thanks for allowing me to comment!national archives civil war